The reason the Citadel has such a “boring” historical story is due in part to the over-zealous work of Edward, Duke of Kent, who was obsessed with creating a defensive network that no adversary could overcome. Learning from the defeat of the French fortress of Louisbourg and the fall of Quebec, as well as the capture of Yorktown and other British losses during the American Revolution, Edward was determined to make the port of Halifax invincible. His greatest fear was an attack by American forces.

The citadel was always presented as invincible to frontal attack, but what if it were destroyed from within, its own weapons turned against it, blown apart like York’s fort in the War of 1812?

Operation: Citadel considers an alternate reality…what if an enemy did stage an attack, but rather than attack overtly, they have crept into the various fortifications around the harbour, with the Citadel at the center, and have placed charges in the powder magazines that will blow the fortifications sky high and signal the time for an enemy fleet, waiting in the dark outside the mouth of the harbour, to come in.

Operation: Citadel is a mixed reality (physical and virtual) multiplayer game. Players carry a tablet computer with an attached handheld projector outside the walls of the Halifax Citadel National Historic Site. Holding the tablet in the direction of the Citadel will reveal a living virtual model of the Citadel during this alternate historical scenario – the notion is that the handheld device works like a portal – breaking through the wall of the Citadel and also breaking the barrier of time. As the player moves around the perimeter of the Citadel, the view through the portal updates accordingly. 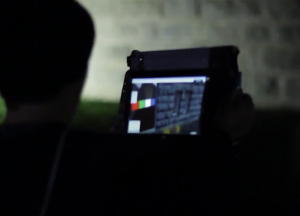 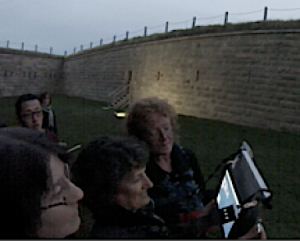 Other players are recruited into service at the Halifax waterfront by soldiers in period costume. Players march through the virtual model of the Citadel using a whole body interface. Connected by network link to the players at the Citadel, if they move close (virtually) to where these players are (physically), they can then speak with them and help them. 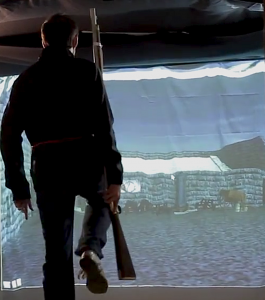 Players at the Citadel are time travellers, trying to prevent an alternate reality from occurring. The quest is to piece together the clues and recruit a soldier (i.e. one of the people playing at the waterfront) to find hidden charges before they go off and render Halifax vulnerable to attack. 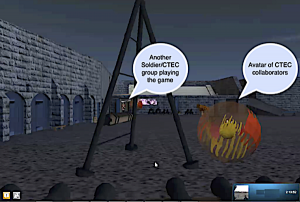 In Operation:Citadel we explore the role of docents in mediating complex mixed reality experiences to provide engaging, playful historical encounters.